Nowadays, rhinoplasty is among the most performed aesthetic operations. When it comes to nose surgery or aesthetic procedures, the first thing that comes to mind are the treatments associated with women. However, our developing social culture has increased the rate of nose surgeries for men as well as women. In this article, we will be talking about male rhinoplasty vs. female rhinoplasty.

Although aesthetic operations have been identified with women, the rate of men having aesthetic operations has been increasing over the years. Factors such as social environment and business life increase men’s thoughts of rhinoplasty. 30-40% of the people who have rhinoplasty surgery are men. Although the nose is important in life for its’ functionality, it is an organ that adds meaning to the face and shapes expression. The purpose of the nose surgery is to give a natural shape that will be compatible with the face.

Male patients decide for a rhinoplasty because of primarily functional problems, secondarily they want to gain an aesthetic appearance. Male rhinoplasty is much more different than female rhinoplasty and requires different aesthetic approach. A straight, not lifted, non-curved appearance is desired in men. Even a small amount of rotation or curvature will result in a more feminine expression. It is considered ideal for the tip of the nose to be 90 degrees in men. Generally the radix (starting point of the nose) is higher comparing to the female nose. Over-reduction of the overall size may cause feminization; therefore precise calculation needs to be made to preserve the masculinity and charismatic appearance.

Nose aesthetic operations for men require attention and care. The fact that your surgery is performed by a successful doctor with experience in the field directly affects the postoperative satisfaction rate. The skin structure and bone structure of men differ according to women. The recovery process for males also depends on the structure of the skin and body’s healing ability.

Nose aesthetics for women are mostly done with the aim of feeling better with a natural appearance. Aesthetic approach for female rhinoplasty requires more minimal touches due to a smaller face than men. It is aimed to eliminate functional problems with an aesthetic appearance. In women, it is desired to gain a smaller and sophisticated nose appearance that is more curved compared to men, with the lifted tip of the nose, which is compatible with the proportions of the face. It is considered ideal for the nose tip to be 110 degrees in women. Here, the patient’s wishes and facial proportions should be calculated and decided accordingly. The healing process in women is 1-1.5 years, considering the skin structure. 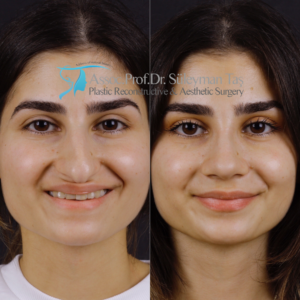 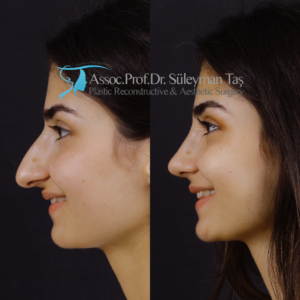 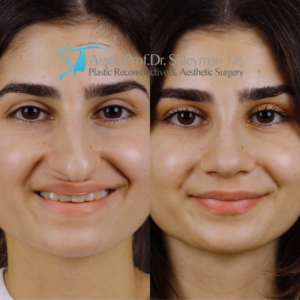 Finally, if you look male rhinoplasty vs. female rhinoplasty, you will see difference in many respects. The most important factor for both operations is the person’s choice of doctor and his / her communication with the doctor. In choosing a doctor it will be better for you to examine his surgeries and to decide based on his attitude and honesty towards you during the examination.

For more information about male and female rhinoplasty you can reach us through our contact number +905434563693. To find out if you are having the best rhinoplasty.

Hello doctor, can dark circles under my eyes treated by the rhinoplasty?

Hello Alize thanks for your question. If the dark circles under your eyes are related to the insufficient oxygen coming into your body they can be improved after septorhinoplasty. Apart from this, dark circles under the eyes can be treated by the Nano fat grafting surgery combined with the PRP.

I have a thick skin and bulbous tip, can Closed Rhinoplasty define it or I need Open Rhinoplasty?

Hello Fatema, thank you for your question. Thick skin and bulbous tip can be reduced and defined by the Closed Atraumatic Rhinoplasty without opening your nose after improving the quality of the skin by the special preoperative treatments. To find out more thick skinned before and after pictures please click on the link https://drsuleymantas.com/thick-skin-bulbous-tip-rhinoplasty/

Incredible transformation of a female patient. What happened with the excessive skin after reduction of her nose on the surgery?

Hello Billie thank you for your question. Thin skin is able to contract and get the shape of the underying structures of the nose during rhinoplasty. Thick skinned patients require different interventions like smasectomy, debulking and alarplasty which is the removal of the excessive skin and fat tissues from the wings of the nose performed to catch the harmony between the tip and bridge of the nose.

When should I stop drinking alcohol prior to the rhinoplasty surgery?

Hello Philipp, since consumed alcohol prior to the rhinoplasty surgery increases the risk of bruising and bleeding during surgery, need to quit consuming alcohol at least 10 days before the surgery, the longer the better.

Can I get my dorsal hump removed without breaking the nose?

Hello Olga thank you for your question. Since I utilize the Closed Atraumatic Technique in my surgeries I reshape the nose without giving an injury to the nose, therefore don’t break the bones but gently rasp the dorsal hump to smoothen the bridge of the nose.

How long is it normal to have swelling after rhinoplasty?

It is common for swelling and bruising to occur after nose surgery. However with the current medical progress, utilized Closed and Atraumatic Approach and drug treatments swelling and bruising is minimized. First two months the recovery is rapid, the remaining swelling will subside next months within at least one year depending on the body’s healing ability and thickness of the skin.