What is Nasal Polyp?

Nasal polyps are non-malignant pieces formed as the pale pink colored small spots in the nasal and sinus cavities. Nasal Polyps are different formations rather than anatomically located conchae. Nasal polyps are seen in 1-4% of adults and 0.01% of children. The likelihood of nasal polyps increases after the age of 20. After telling What is Nasal Polyp?, We are going to tell symptoms and treatment of Nasal Polyp. 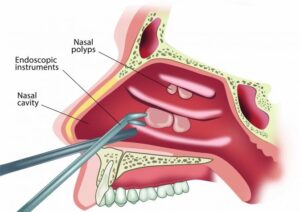 The appearance of nasal polyps resembles a mass filled with fluid. Obstruction in the nose triggers these formations. Since the causes such as allergy and aspirin sensitivity trigger intranasal obstruction, people who faced with these conditions are much more likely to have nasal polyps. 30% of Nasal polyp is seen in people who have allergies.

How are nasal polyps formed?

There are many factors that play a role in the formation of nasal polyps. These factors are;

These factors cause edema in the nasal mucosa and fluid accumulates in it.

What are the symptoms of nasal polyp?

Nasal polyp manifests itself with a runny nose, which usually does not pass with medications. In addition, if the polyp is located closer to the outer side, you may be able to see the polyp through the nostril.

How is Nasal Polyp Diagnosed?

You may have symptoms of nasal polyp. But your doctor should decide if the condition you’re facing is a nasal polyp. Your doctor can make this diagnosis by examining the nasal passages. During this examination a nasal endoscopy is performed with a device which has a camera attached to the tip.

In some cases, computed tomography (CT) is used to look at the nasal passages.

How is nasal polyp treatment done?

After the diagnosis of nasal polyp, it is time to have its treatment. Symptoms, allergy or infection status, findings and visualization in the nasal passages of the patient are the factors that determine the treatment process. There are two types of treatment for nasal polyp.

Nasal polyps can usually be treated with the method of treatment called intranasal and systemic corticosteroid. In this way, problems such as runny nose and congestion can be solved. In cases such as allergies or flu, leukotriene antagonists and antihistamines are used as the additional medicines. Antibiotics are used in acute episodes of sinusitis additionally to the non-steroid anti-inflammatories and decongestants.

Endoscopic method is used while performing surgical treatment. The procedure is performed according to whether there is a condition accompanying the nasal polyp. Only polypectomy, in which nasal polyps are removed, or extended sinus intervention, which can be performed depending on the situation, will be the solution to the problem.

Nasal polyp are nasal meats that are formed later. Congenital ones are not called as nasal polyp. Nasal polyp is a condition caused by subsequent factors.

2. WILL NASAL POLYPS REFORM AFTER TREATMENT?

Nasal polyp is a condition that can recur. Recurrence of nasal polyp is high, especially in individuals with allergies.

3. AT WHAT AGE DO NASAL POLYPS OCCUR?

Although nasal polyp is usually seen after the age of 20 in adults, there is a possibility that it can be seen in children as well.

4. IS THE NASAL POLYP NOTICEABLE?

5. HOW ARE POLYPS CLUSTERED? SMALL OR BIG?

The clustering shape, in which many small polyps are together, is not very common. Small polyps are generally formations that do not disturb patients. Polyps that cause symptoms are large polyps. That is why polyps usually appear as a wide range of large polyps.

6. HOW LONG DOES THE NASAL POLYP SURGERY LAST?

This period varies depending on the patient. In some cases, corrections such as septum deviation may be needed. This extends the duration of the surgery.

7. WHEN CAN I RECOVER AFTER NASAL POLYP SURGERY?

You will be discharged within 2-3 hours after the nasal polyp surgery. It is recommended to rest for a minimum of 3 days and you can return to your daily life within 5 days.

8. WHEN CAN I BREATHE EASILY AFTER NASAL POLYP SURGERY?

This is one of the periods that vary according to the patient. This period may vary between 15-20 days depending on the condition of the patient.

Will my nose change if I lose weight? When should I have rhinoplasty?

Hello Zilan, thank you for your question. Significant weight loss may have an impact on the skin, therefore recommended to have a rhinoplasty surgery after reaching the ideal weight.

What happens if a patient is due to have a rhino plasty and you notice he or she has a nasal polyps?? Do you proceed two diffrent surgeries ..?

Hello Karima thanks for your question. As every surgery rhinoplasty requires detailed surgical planning based on the endoscopic examination where all functional and aesthetical issues are determined including polyps if there are any. Polyps can be removed by the endoscopic surgery in the atraumatic manner without harming the surrounding tissues during the surgery.