Prominent ear can cause problems even in adults. Especially with the start of school age and the increase of socialization of children with a prominent ear, the psychology of these children can be adversely affected. In this article, we will try to answer your questions such as ‘Is prominent ear a disease?’, ‘How is a prominent ear corrected?’, ‘What are the effects of the prominent ear on the child psychology?’

Is Prominent Ear a Disease?

This situation, which is called a prominent ear among the people, is a situation that results from a distance that is larger than normal between the head and ear. Many people can ask questions if the prominent is a disease. It is worth noting that this situation is only related to the aesthetic appearance and cannot be considered in any way in the disease category. However, the prominent ear appearance may adversely affect the psychology of adults and especially of children.

The Problem Can Begin at School Age 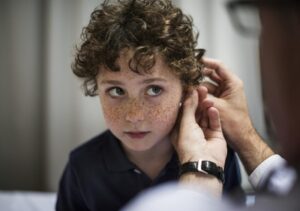 When Should Prominent Ear Surgery be Performed?

How is the Prominent Ear Surgery performed?

In each prominent ear surgery, an operation method is selected according to the prominent ear structure. This decision is made by the plastic surgeon you choose for ear surgery. Many methods are used for prominent ear surgery. Removal of cartilage from the ear or pinning back with a thread, are the methods which are still in use today but less preferred. With these methods, it can be seen that the ears can restore the previous shape or cause various deformations.

In our clinic, we utilize the awarded Flap Technique (Modified  Postauricular  Fascial  Flap) developed by Assoc. Prof. Dr. Suleyman TAS. During surgery, which is performed under general anesthesia for children under 12 years old, an incision is made from the back of the ear, and the flap is prepared in a modified way, so that the ear lies back and has a natural appearance. Absorbable sutures are used in this method, therefore there is no suture extrusion or sensitivity of the ear in the long term. This method is permanent.

As can be expected, temporary edema occurs at the operation site after the prominent ear surgery.  Two weeks after the surgery, the swelling subsides and the ear starts to look normal. As a result, your child begins to feel safer and more socially confident and the psychological traumas that may arise from the ear structure are prevented.